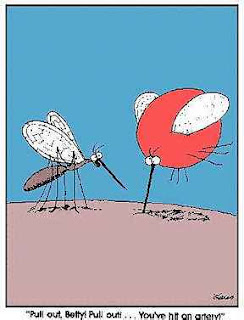 I'm still having nightmares about all the mosquitoes. Seriously. There were so many of them the whole family was inhaling them. I have bruises from scratching bites on my legs.

Back country Yellowstone was not what I thought it was going to be like. First, I have read many other blogs that go into detail about the number of mosquitoes and how they have ruined rips. But we went prepared for this trip with 100% DEET, 40% DEET and 25% DEET as well as DEET free repellent. For those of you unwilling to count that up, that is 4 different types of bug repellent. Not only that but all four of us had long pants, long shirts and bandannas to cover up just in case the DEET failed.

Well, the DEET failed, the bugs can bite through clothing and they were so thick that they were in our breakfast food, in our mouths, up our noses and in our water. The worst thing was that because they were so thick we couldn't stop to take a break without getting eaten alive. . .literally. So, by the end of the day we were all exhausted, literally drop dead tired, bitten at least 100 times a day and unable to cook food because the bugs were swarming us.

The second not so amazing thing about the backpacking was that I wanted the family to experience real Yellowstone, away from the crowds, full of wildlife and tons of thermal features not commercialized. Well, we say no exciting wildlife on the back country trip, we were too tired to hike to the cool thermal features and the hiking was brutal. 34 miles in four days with 6,000 feet of total elevation gain and loss. Then once we emerged from the back country the mosquitoes abated, the animals came out ( we saw 5 really neat animals in the 20 minutes after we got back) and the weather was awesome. At least the trip was character building.

The good news is that I think I lost weight. The bad news is that my kids probably hate backpacking for life now and we are really broke!! Gotta love vacation.
Posted by Cristine at 2:44 PM